Ahead of a meeting of the EU bank’s Governors in Luxembourg, 70 civil society organisations, think tanks and academics across Europe have called for a fossil-free European Investment Bank (EIB) in a joint statement released today.

As EU Finance Ministers gather in Luxembourg as Governors of the EIB to discuss this year’s priorities for the bank of the European Union.

Civil society organisations, think tanks and academics across Europe have seized this occasion to underline in the statement the urgent need for a progressive energy and climate approach at the Bank.

“We’re facing a climate emergency and it’s simply astounding that the EIB should be even considering subsidising yet more fossil fuel infrastructure for years to come. EU Finance Ministers must make it clear that financing climate change is no longer an option. Climate change is already devastating lives and livelihoods across the planet. The time to stop funding fossil projects is yesterday, not later.”

The statement calls for a complete end to funding of fossil fuel projects by the EIB, stemming from the “Fossil Free EIB” campaign launched earlier this year by a group of civil society organisations including Counter Balance, Friends of the Earth and many others.

Though the bank has already publicly committed to aligning its portfolio with the Paris Agreement, it currently still uses billions of EU tax payers’ money to fund energy infrastructure detrimental to our planet’s future: fossil fuels, especially gas. 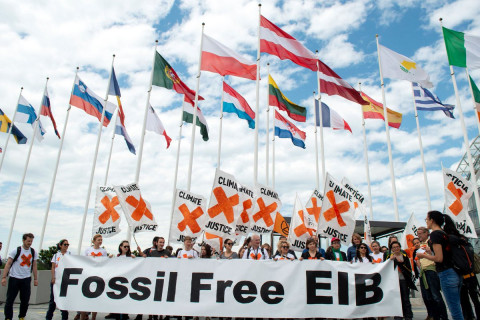 According to civil society, it is the EIB’s responsibility, as the world’s biggest public bank, to lead the way towards the urgent energy transition, by switching its funds from fossil fuels to renewables and energy efficiency projects.

Echoing a call coming from tens of thousands of EU citizens - who made their voices heard during the bank’s public energy policy consultation - civil society groups call on EU Member States - as the EIB’s shareholders - to lead the bank in this direction.

“Amid increasing climate awareness among both EU politicians and citizens, steering the EIB out of fossil fuel projects is just a logical step for European governments to prove that after progressive political statements, concrete actions do follow. EU Finance Ministers should use the Governors Meeting to scrutinise the Bank’s Energy Lending Policy and its compatibility with the Paris Climate Agreement”

Question is: will they listen to the citizens & push for a #FossilFreeEIB? Problem must be tackled from the source...#ECOFIN