The 28 EU heads of state today backed a vision of Europe's energy future which will keep the continent dependent on fossil fuels.

European leaders' plans for an 'Energy Union' strategy were strongly criticised by Friends of the Earth Europe for the decision to emphasise new gas supplies, instead of prioritising energy efficiency and renewables to cut emissions and energy imports.

Brook Riley, climate and energy campaigner for Friends of the Earth Europe said: "It's baffling to see governments putting gas in prime position when these plans were born out of a desire to end gas import dependency. Heads of state seem to have fallen for gas industry propaganda. Saying gas is a clean fossil fuel is like saying filter cigarettes will prevent lung cancer."

With their decision to include gas diversification, nuclear and unconventional fossil fuels (disguised under the terms 'low carbon' and 'indigenous') EU leaders are not matching their promise to cut emissions with action to transform Europe's energy system, says Friends of the Earth.

The Energy Union proposal was released by the European Commission one month ago.

In the year of global climate talks in Paris, much bigger increases in efficiency and renewables are possible and would allow much steeper emissions cuts than the EU's current 'at least 40% by 2030' target.

The European Parliament has repeatedly supported efficiency and renewables targets for 2030 which would deliver up to 54% greenhouse gas cuts, according to Ecofys, a research group.

European Commission analysis also estimates major benefits from prioritising energy efficiency and renewables. For example, meeting the EU's full cost-effective potential would reduce gas imports by 40% over the next fifteen years, and increase GDP by 4.45%, compared to business as usual projections.

Brook Riley continued: "The Energy Union is a chance to think different. The EU should take this chance to invest in domestic renewables and energy efficiency, and massively reduce its carbon emissions, not subsidise external energy suppliers like Russia or the Middle East. We're heading towards a 4-6°C increase in global temperatures, with devastating consequences. We need to make fossil fuels history, before they make us history." 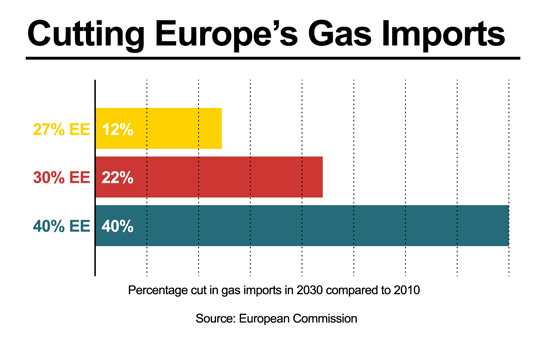