Across Europe, citizens stood shoulder to shoulder this month in a series of protests and actions that demonstrated the ever increasing public opposition to the faltering Transatlantic Trade and Investment Partnership (TTIP) deal.

Our member groups joined hundreds of thousands of people on the streets of Europe's town and cities as part of a an International Week of Actions (10-17 October) to stand against the Trojan horse treaty that puts profits for big business ahead of our society, health & environment.

In Berlin, Friends of the Earth Germany joined an incredible protest of over 250,000 people for one of the biggest actions in the city for years. Citizens, activists, civil society movements and trade union members travelled from across the country to take part in an event that exceeded the expectations of organisers and showed the strength of public opinion against the TTIP deal. 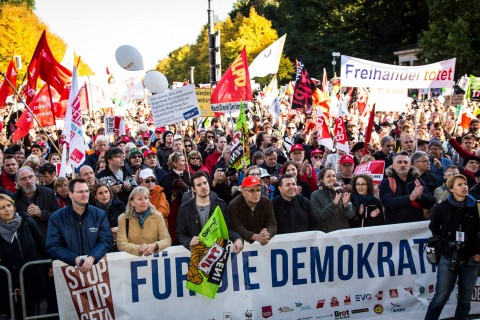 On a beautiful sunny day in Amsterdam, Friends of the Earth Netherlands joined over 7,000 people on the city's streets for a milestone action to stand up for citizens' rights and the environment. People of all ages marched through the city's street carrying flags and banners to raise the alarm against TTIP. 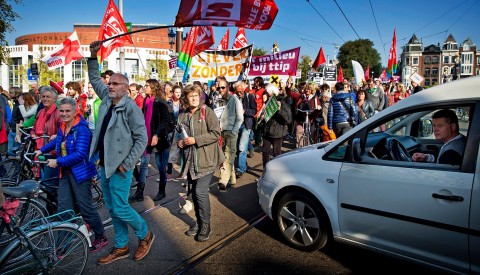 Joining the European-wide actions, Friends of the Earth Spain took part in a huge anti-TTIP demonstration involving over 1,300 civil society organisations in Madrid, denouncing a system that put profits for multinationals ahead of the rights of citizens. Called by the 'No campaign to TTIP' and the Spanish Alliance Against Poverty,  the action stressed that free trade agreements and international policies have widened the gap between the rich and the poor. 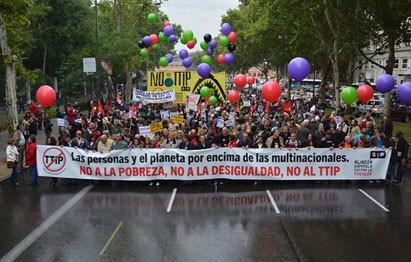 NOAH Friends of the Earth Denmark organised a series of online actions to raise awareness of the dangers of TTIP, as well as holding a protest in the centre of Copenhagen, while in Sofia Friends of the Earth Bulgaria led a strong public protest that was attended by hundreds of people.

At the end of the week, major protests were held in Brussels where activists from across Europe converged in their thousands to stand up for citizens' right and reject the TTIP and CETA deals. Events included a series of actions, workshops and public meetings, culminating in a major march through the streets of the city on Saturday, 17 October. 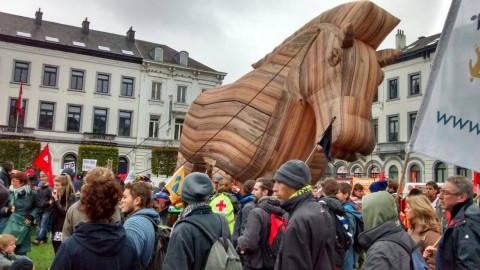 This incredible swell of public protest followed the major success of the self-organised European Citizens Initiative, a coalition of over 500 civil society groups and activist movements that presented a petition containing 3.2 million signatures to the European Commission in mid-September. 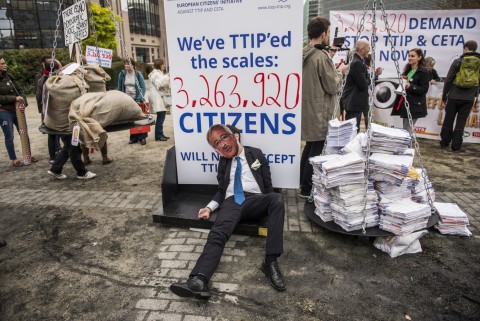 The Trojan Horse supports our actions

Our Trojan Horse has been busy! Throughout the week of actions across Europe the giant inflatable horse helped raise awareness of the anti-TTIP actions, joining Friends of the Earth England, Wales and Northern Ireland and Friends of the Earth Netherlands to hand over the ECI petition in their countries, before making its way back to Brussels to join the anti-TTIP protests outside the European Council. 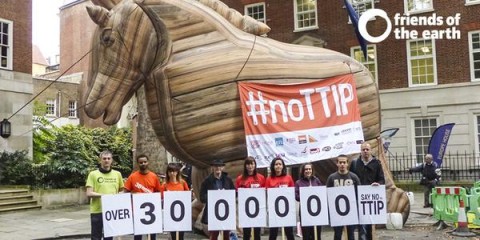 Given the busy schedule of anti-TTIP actions over the last month, our trade campaigner Natacha Cingotti has written a handy blog to explain the significance of the events and the current situation regarding the TTIP negotiation. You can also listen to her interview for Real World Radio where she updates the network on recent developments and urges everyone to continue to fight against the Trojan Treaty!