"Commission President Barroso needs to implement the Fuel Quality Directive now to protect our climate and keep the dirtiest fuels out of Europe."

That was the message activists from Friends of the Earth Europe took to the headquarters of the European Commission in Brussels today. The campaigners called on President Barroso to finally implement this crucial piece of European climate legislation that has been delayed by more than three years already.

Carrying posters calling on Barroso to act, they handed more than 1000 postcards to European Commission workers. They were joined by activists from Friends of the Earth Nigeria and Friends of the Earth Netherlands as well as members of Transport & Environment and Greenpeace. The same message was delivered by an advert in the European Voice newspaper.

Fabian Flues from Friends of the Earth Europe said: "Commission President Barroso has repeatedly said that strong climate action is one of his priorities but at the same time the implementation of the Fuel Quality Directive has been delayed by more than three years. There can be no excuses anymore: Barroso needs to act and implement the Fuel Quality Directive before dirty tar sands oil starts reaching Europe."

The Fuel Quality Directive mandates a reduction of carbon emissions of transport fuels by 6% between 2010 and 2020. If implemented correctly it would make it nearly impossible to import the most polluting fuels into Europe. This would affect tar sands oil, which is the most destructive fossil fuel in commercial production today.

The implementation of the Fuel Quality Directive has been delayed by strong lobby pressure from the oil industry and the Canadian government. Now time is running out: while only small amounts of tar sands oil have been exported to Europe so far, the completion of a pipeline leading to the US gulf coast could see an enormous rise in tar sands oil imports into Europe in 2014.

The action today comes after a letter was sent to Commission President Barroso by 21 Nobel laureates last month in which they urged Barroso to immediately implement the Fuel Quality Directive. In the letter the Nobel laureates wrote, "Fully implementing the EU's Fuel Quality Directive will send a clear signal that the European Union is committed to action that supports the rights of future generations to a healthy planet". 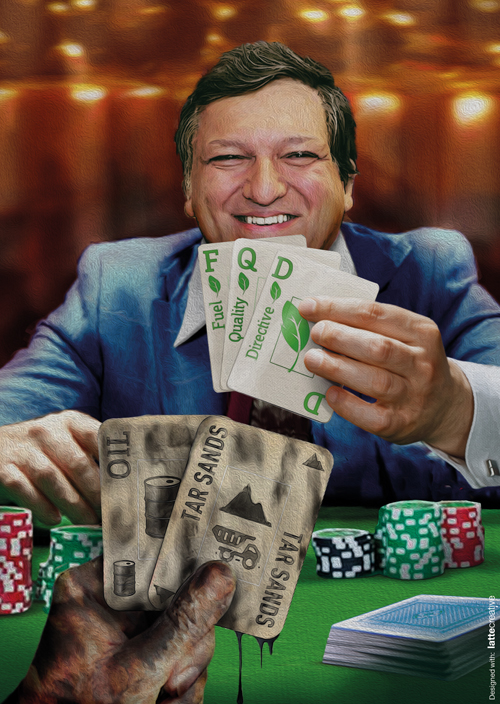