Hundreds of thousands of youth climate strikers, and adults, today hit the streets of cities in every European country. They demanded urgent, massive and transformational action for a safe fossil-free future.

In one of the biggest environmental protests ever seen, 900 grassroots ‘Global Climate Strike For Future’ events took place across 35 European countries. There were 2,000 youth uprisings globally. Several countries reported the largest demonstrations on climate change ever witnessed. For example Austria, Czechia, Spain, and Ireland.

Politicians are being challenged to act at speed and scale to bring the fossil fuel age to an end.

Friends of the Earth lends its full support to the strikers. We call for Europe, a region that was largely responsible for causing climate change, to halt the development of new fossil fuel infrastructures, transform our energy system away from fossil fuels in a just way, ensure a right to energy for all, and create a future built on 100% renewable energy within the next decade.

We're with the #climatestrike in Brussels. Tens of thousands are on the streets. Youth are leading the way and we ALL must join them#FossilFree #FridaysForFuture pic.twitter.com/I2Zj1FbGwK

Iosef Boraei, a youth activist of Young Friends of the Earth Cyprus, and helping to organise climate strikes in Nicosia, said:

“We youth are on the front line of climate change, and that’s why we are striking all over Europe and the world to push people in power to act to tackle the climate emergency. We cannot leave our future in anybody else’s hands, the people in power have lost our trust, and it’s now up to us to take the lead.

“Governments should listen to science and to those who will be affected the most. Fossil fuels must stop being extracted, we must change politics, the current economy and all aspects of our current lifestyle - a system change. And this has to happen now.”

"Youth are on the front line of climate change" #ClimateStrike #FridaysForFuturehttps://t.co/PBa2qc1XVy pic.twitter.com/waNLsQ4FP9

Jagoda Munic, director of Friends of the Earth Europe, said:

“The young people on strike today speak with the authenticity of those whose lives will be dominated by climate breakdown, a crisis they did not cause.

“Climate change still feels distant to many – but it is close to home for the youth taking action. Their demands for real, massive and immediate action for a fossil-free society must be heard. Friends of the Earth gives them our full support.

“If decision makers were to act in line with youth climate strikers’ demands, they would be tripling our renewable energy goals, shutting off trade deals with climate deniers, and switching finance off fossil fuels to the fossil-free future we need.”

We stand with children and young people across the world taking part in the global #climatestrike #schoolstrike4climate #FridaysForFuture pic.twitter.com/sBYaNCgY55

The world has pledged in the Paris Agreement to reduce carbon emissions to limit temperature increases to 1.5 degrees of global warming – a level that would still entail chaos, droughts and rising tides. However commitments currently pledged by world leaders would, even if fulfilled, lead to catastrophic temperature rises of upwards of 3.5 degrees. 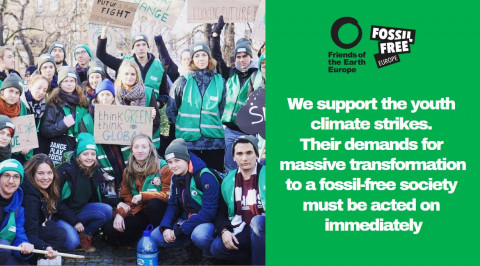