Citizens in the Czech Republic have been spared the worst of plans for new coal this week, although the Czech government went back on its word to block the outright expansion of two mines in the north of the country.

After having set hard limits on coal expansion in 1992, the minister of market and industry Jan Mládek recently opened discussions to expand two mines, Bílina and ČSA. Both are located close to towns which already feel the impacts of the mines, and pushing beyond the boundaries would have seen them move as close as 150 metres to people's homes.

There was good news at ČSA, as the government decided not to expand it towards the towns of Horní Jiřetín and Černice. However it gave the green light to partially expand the mine at Bílina, pushing it up to 500 metres to the town of Mariánské Radčice, and excavating about 100 tons of coal. 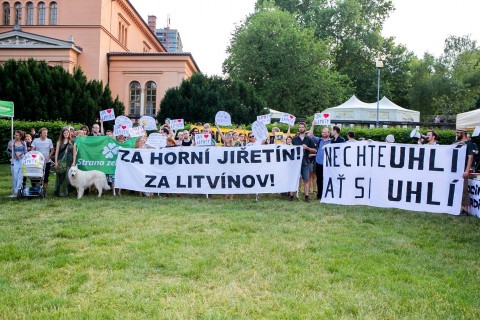 Citizens and campaign groups celebrated a partial victory – the worst decision was avoided, which would have been complete repealing of the limits at both sites.

Hnutí Duha/ Friends of the Earth Czech Republic is involved in the Limity jsme my ("we are the limits") campaign, which has helped to put pressure on the Czech governement to protect citizens and the environment around the mines. Had the restrictions been lifted on the ČSA mine, more than 750 tons could have been be excavated and the two small towns of Horní Jiřetín and Černice would have been destroyed.

While they are celebrating a partial victory, Limity jsme my' are looking ahead to 2035, when the pit at Bílina was set to be closed according to the 1992 agreement. With this now out of the window, coal could yet be extracted after this date in Bílina – and so the fight to kick coal out of north Bohemia continues.

We are the limits! Anti-coal protests across Czech Republic (June 2015)