The danger and the injustice of summer energy poverty

As temperature gages hit 40°C across Europe this week, terrifying heatwaves are becoming the new normal. But we are not all equal in the face of extreme weather, writes climate justice campaigner Clemence Hutin.

Last summer, a shocking heatwave seemed to dry up and set alight our continent before our eyes. This year we see this terrifying pattern repeating.

In June, parts of France hit the hottest temperatures the country ever recorded, nearly 46°C. In the United States, nearly 150 million people were under an excessive heat warning last weekend. Unheard of forest fires are - for a third year running - raging in the Arctic, as hundreds of firefighters battle forest fires in Portugal. Europe is starting to experience climate breakdown in a realer, scarier way - while the Global South has been experiencing deadly heatwaves for decades.

These extreme weather events are wake up calls. They should incite radical action to halt climate breakdown.

But as these events become the new normal, we must also start rolling out plans to adapt to a hotter world, knowing that we are not all equal in the face of extreme weather.

We often focus on winter energy poverty, but 1 in 5 in the EU cannot afford to keep their homes cool in the summer.
And it's going to get worse with climate change.
So what do we do? https://t.co/A1nv0AuRGz pic.twitter.com/jnTiTuB7TY

The injustice of summer energy poverty

Heatwaves are estimated to kill 12,000 people every year around the world. In 2018, record numbers of people were admitted to hospital in the UK heatwave, overloading already stretched staff and resources. The same year, in Japan more than 130 people died and 70,000 were rushed to hospitals; while in Quebec, the heat claimed the lives of 90.

This is not just a problem of heat. The poorest and most vulnerable are disproportionately at risk.

In Europe, the latest data tells us that about a fifth of people cannot afford to keep their homes cool in summer. This spells danger when heatwaves occur: those with lower incomes, people of colour, and homeless people are on the frontlines, as they tend to live in the most inadequate homes (or none at all) and have the least access to cooling.

Heat also combines to amplify other environmental health risks, especially air pollution -- affecting in particular the elderly, people with heart conditions and chronic disease, those working outside, and children. 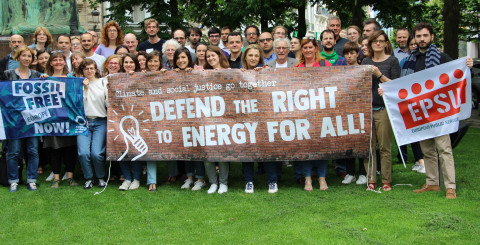 Heatwaves could increase 50-fold by the start of the next century. A new study in the UK predicts that heat-related deaths are set to triple to 7,000 a year by 2050. Current global warming trends could mean three quarters of humanity face deadly heat by end of century.

For those who can afford it, installing air conditioning can keep them cool. But collectively, this promises only to further warm the planet, as it draws more demand for (fossil) energy. Global energy demand for air conditioners is set to overtake that of heating by 2060. In some cities, AC already accounts for 40 per cent of power usage. There are also immediate negative consequences: ACs tend to heat up urban areas, exposing people outside to even higher temperatures. 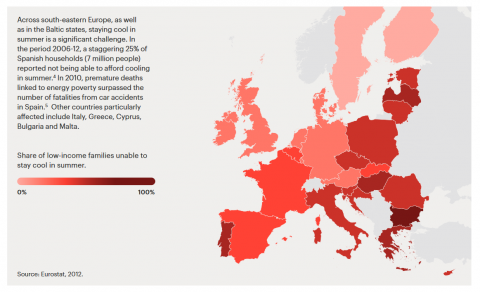 Cool the planet, cool our homes

We are heading for a 5 to 6°C warmer world if we do not radically change our economic model. Current climate policies, including EU renewables and efficiency targets, are far from adequate – and are being undermined by plans for new pipelines, airport runways, fracking rigs and subsidies to fossil fuels.

To have a chance of a safe and cool climate future, we need the strongest action now to get Europe fossil-free.

We also need adaptation plans for all of Europe, to prepare for hot (and stormy) years ahead. More green spaces in cities, better agricultural practices, more effective forest fire prevention and coherent heatwave plans. Massive investments in energy-efficient homes can help protect people during heatwaves as well as freezing temperatures – especially if it’s directed at the most vulnerable – and would reduce carbon emissions and allow for a switch to 100% renewable energy.

We also need immediate steps for relief. In 2003, a record-breaking heatwave killed 70,000 in Europe. We were not ready for the public health crisis then: hospitals were unprepared, special care for the elderly and needy not put in place, information was not disseminated. We need public awareness on health risks, hotlines providing advice, free public transport, cooling areas, water distribution in public spaces – and hospitals at the ready.

Will we be ready next time? 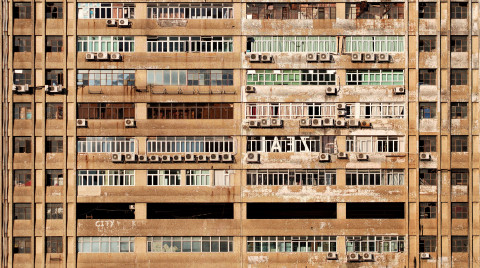