Over 500 academics, activists, campaigners, policy-makers and interested citizens from around the world – including a number of representatives of Friends of the Earth groups – took part in the Fifth International Degrowth Conference, Walking the meaningful great transformations, from 30th August to 3rd September in Budapest, Hungary.

The week's events ranged from academic talks and panel debates, to workshops, concerts, tours and exhibitions, all centred around the increasingly popular and important concept of degrowth. Over the past decade, this concept has developed as an alternative narrative to the hegemony of Gross Domestic Product (GDP) as a measure of societal progress; many have recognised that infinite growth in a finite world is simply not possible.

A growing body of research shows that the mainstream focus on growing GDP is a major driver behind the long-term destruction of good conditions for human life on Earth. The current paradigm of "higher, faster, further, more" needs to be challenged if we are to reduce the rising inequalities in wealth, health and opportunity, and environmental destruction. This means a major shift in both how we produce and consume shared global resources – focusing on less but better – and in how we democratically organise society.

Beyond growing academic evidence and support for degrowth, there are inspiring stories and initiatives all over the world of communities practically challenging the growth system, including Transition Towns, the permaculture movement, community-supported agriculture projects, and the climate justice movement. 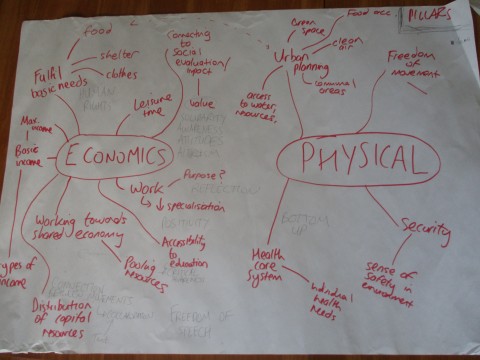 The resource use and consumption team at Friends of the Earth Europe ran a participative discussion on "Wellbeing, Degrowth and Consumption", exploring wellbeing at the personal, collective and global levels and delving into questions such as: what are obstacles to wellbeing, what can be done to increase collective wellbeing and how does wellbeing relate to material consumption?
Participants brainstormed these topics and more. The outcome was informative, inspiring and mo-tivating. Many identified fear of change and fear of diversity, lack of equal distribution of wealth and resources and lack of access to education and information as some obstacles to societal well-being, whilst increased solidarity, strong relationships, basic needs such as food and housing, more free time and the sharing of resources were identified as some fundamental requirements to in-crease societal wellbeing.

Tackling Power and Privilege at the 2016 Degrowth Summer School

The Ecologist: why the degrowth debate is gaining momentum