Friends of the Earth Germany, alongside allies and German brewers, called for a ban on fracking outside of the German parliament today. The alliance of brewers were protesting against the threat of fracking to water quality, and ultimately German beer, and have launched special bottle-caps for beer bottles with the slogan "Nein! Zu Fracking". 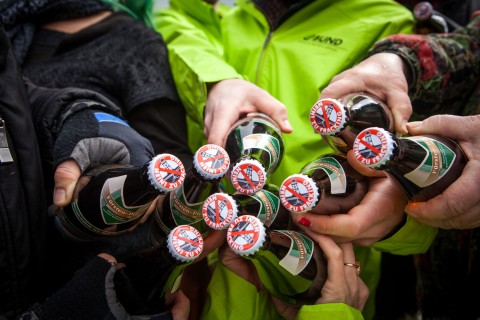 With no clear regulations around fracking in Germany, the brewers see fracking as a threat to the German Reinheitsgebot, or beer purity law, established in 1516. Along with Friends of the Earth Germany they are calling for a national ban – already supported by many regions in Germany. The demonstration was a reaction to the government's rejection of two fracking bans proposed by some opposition political parties in Germany.

The action also coincided with an announcement that the European Commission would refer Poland to the European Court of Justice for failing to ensure adequate assessments of the environmental impacts of fracking operations. The Polish government introduced industry-friendly laws that allowed drilling for oil and gas at depths of up to 5,000 metres, without first assessing the environmental impacts – violating European law.