French activists say no to offshore oil and gas

Friends of the Earth France, along with a number of allies, ended a three-day blockade yesterday of an international summit on offshore oil and gas drilling, in Pau, France, with a mass 'die-in'.

Over 500 activists peacefully demonstrated against the negative impacts of offshore exploration and exploitation, under discussion at the MCE Deepwater Development summit by representatives from big oil and gas companies including Total, Shell, BP, Exxon, and Repsol. 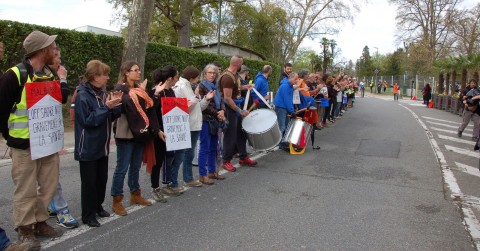 Offshore oil and gas exploration have devastating impacts on the local environment and climate, and the continued extraction and consumption of fossil fuels is incompatible with the Paris agreement and limiting global warming below 1.5°C.

Antoine Simon, anti-fracking campaigner for Friends of the Earth France said: "The French government describes itself as a climate champion, but in reality walks hand-in-hand with climate-killing oil and gas companies – owning shares in some of the most destructive energy companies in the world. The three days of peaceful demonstration sent a clear message to politicians for the need to move away from fossil fuels."

The blockade was preceded by three days of workshops and training, as part of a climate-camp-style event, on topics including first-aid, legal advice, and non-violent demonstration. The blockade included a peaceful gathering at the entrance of the summit, which was met by tear-gas from police, a large human-chain surrounding the summit, theatre, concerts and a mass 'die-in'. 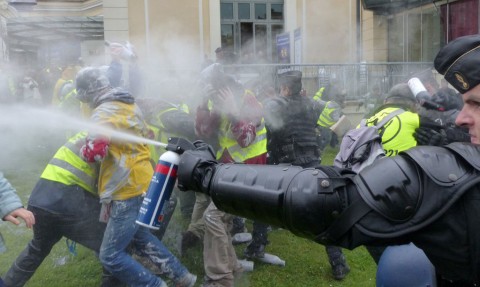 Friends of the Earth France continues to campaign against dirty fossil fuels – especially unconventional oil and gas. The French government, according to the group, is complicit in the climate-killing activities of the big oil and gas companies present at the summit, and needs to act like the climate champion it claims to be – by investing in renewables and energy efficiency.