The Dutch government's friendly relationship with big oil companies, and unwillingness to block polluting tar sands from Europe, has been ridiculed this morning by Friends of the Earth Netherlands/Milieudefensie.

In a colourful action outside the Shell headquarters in The Hague activists dressed in Dutch national costume had oil poured over them by a 'representative' from Shell. At the same time, an activist playing Joop Atsma, the Dutch secretary of state for infrastructure and the environment, looked on smiling.

The stunt followed the Netherlands' abstention from a crucial EU vote on the Fuel Quality Directive last week. The vote could have helped keep tar sands out of Europe but not enough countries supported the European Commission's proposal. The final decision will now be taken by European environment ministers in June.

Friends of the Earth Netherlands, together with cosmetics chain LUSH, drew attention to the destructive impact tar sands mining and production has on local communities. They called on Atsma to vote against tar sands and highlighted the Dutch government's stake in oil company Shell.

A statement against tar sands was handed to Dutch MPs by Clayton Thomas Muller, the chief representative of the PUKATAWAGA Indians from Northern Manitoba, in Canada which is the world's biggest producer of oil from tar sands. The statement asks that they help stop tar sands destroying the Canadian countryside and his community. 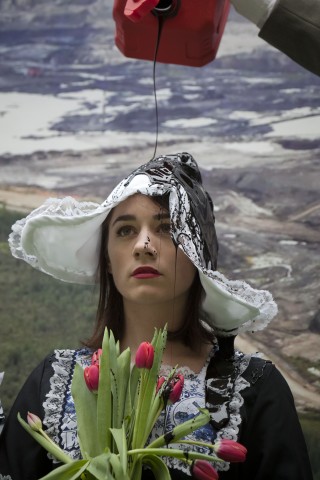 Read Friends of the Earth Europe's reaction to the FQD vote (23 February, 2012)