What an emotional week – hearing the many stories of local communities resisting the fossil fuel industry in the United Kingdom, and of those creating the alternatives we need to achieve a fossil free Europe. Friends of the Earth groups from across the European network gathered for the annual general meeting, and following that celebrated a successful Basecamp – a festive weekend for local groups and activists from Friends of the Earth from across the UK.

A few months before I joined a training on working with 'affected communities', organised by our School of Sustainability project. This is where I first met the inspirational community organiser Jamie Peters. He is one of the few community organisers in Friends of the Earth England, Wales and Northern Ireland, and he gives extraordinary support to the local community in Lancashire who have been resisting fracking at the Preston New Road site near Blackpool in Northern England.

When I met him again last week, it was on the frontline of that struggle, during the Friends of the Earth Europe's annual general meeting as part of a solidarity trip to the community Jamie works with.

The Preston New Road fracking site has been the frontline for local communities resisting fracking for over six years – and people have been present at the site every single day. On a local level they have full support, with both the local council and community saying no to fracking. Despite this, the government, in its desperate dash for gas, gave the go ahead to Cuadrilla, the company operating on the site.

On the day we arrived, the community had been informed that part of the fracking rig was due for delivery. Emotions were high. When we arrived we saw people standing at the entrance to the site, as they do daily, amongst them children, farmers and the 'Nanas' – a group of women coordinating the resistance.

We stood in solidarity, bringing an international presence from over 20 countries, and shared experiences with those present. I spoke to a fourteen year old boy, Morgan, who had been involved for over four years. He spoke of how important this was to him, but also how tiring. He worried about the small numbers of activists at the site, saying they were easily outnumbered by police, sometimes violently. I also spoke to one of the Nana's, Tina, now the public face of the resistance. Her passion and drive gave me hope that together we can win.

Everyone asked how, in a democratic state like the UK, the police continue to protect the interests of big corporations and the destruction of nature and livelihoods, instead of the interests of people. A question we can't answer; only challenge through non-violent resistance. 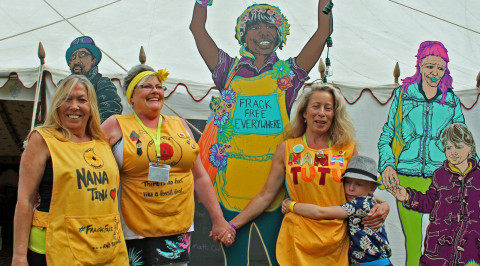 As we left the site and returned to our meeting, we hoped to have at least contributed new energy, and to have connected the dots between similar struggles in the network. Exactly the role that Jamie plays; connecting the local community with Friends of the Earth and with other local struggles around the world. Local to global, global to local.

Tina, Jamie and others from the Lancashire community joined the Basecamp that followed the annual general meeting – along with over 600 local activists, all with their individual and inspiring stories, and solutions. So many examples of how communities turn passion into action and hope.

For me, working at the European and International level can often be very abstract and distant from those communities struggling on the frontline of the issues we work on. It was a good reminder of the urgency; time is running out and the impacts of climate change are already upon us, and especially upon those least responsible for it.

We need to organise and mobilise – people have the power and can win the fight for justice, for an equal, sustainable and quality life for all. Thanks to all of those who struggle every day to protect people and planet. We need more of you.