"Not here, not anywhere": Friends of the Earth joins anti-fracking activists

This weekend, Friends of the Earth campaigners from across Europe visited one of the front-lines in the struggle against drilling for unconventional oil and gas in the south-east of England. There is a growing movement in the UK to oppose fracking – in the courts, in the fields and on the roads, and by creating community-owned renewable energy projects. Friends of the Earth is linking this movement with struggles to oppose fracking in other parts of the country and across the world.

Friends of the Earth campaigners from France, the Netherlands, Scotland, Belgium, Ireland, Hungary and Germany, as well as allies from Lithuania and Food & Water Europe, met in London for a two-day strategy meeting to discuss how to support the growing movement against unconventional fossil fuel extraction in Europe. The meeting concluded with a visit to anti-fracking activists in the region just to the south of London.

Drilling is no longer taking place in Balcombe, the village in West Sussex where the 'community protection camp' attracted widespread media attention last summer. The site that the residents and their supporters occupied for several weeks is once more a roadside verge – with an injunction to prevent the return of the camp. The visible protests may have finished but residents are preparing a court case at the High Court, to be heard at the start of November. The case will determine whether oil exploration is allowed to resume in their village.

Meanwhile, a community-led renewable energy cooperative "Repower Balcombe" has been set up with the aim of generating as much electricity from solar power as the village uses. Villagers are also questioning the role of Simon Greenwood, the local landowner (whose extensive land ownership means the village is run as a "feudal estate", according to residents), and who has allowed drilling on his land. Seeing this level of activity, it is clear that the anti-fracking struggle has prompted a democratic renewal in the village. 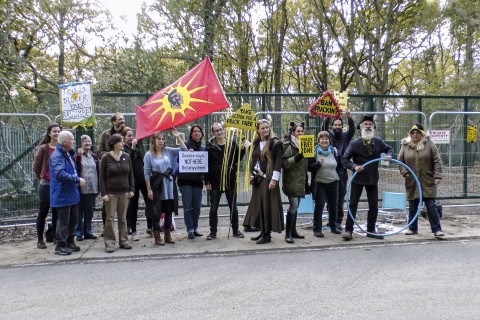 A few miles away, just over the border in Surrey, a new community protection camp has been set up by activists opposing the drilling at Horse Hill. Just as in Balcombe, the drilling site is also owned by a large landowner, and just as in Balcombe there is growing concern amongst the local residents of the impact of fossil fuel extraction on the local water and air quality and on the landscape. Links are also being made with the wide issues of climate change, as well as the lack of transparency and democracy in how decisions that affect the local community are being made.

The Horse Hill camp is currently a handful of tents between two busy roads, decorated with anti-fracking slogans and messages of support. Although they don't yet have the numbers that joined the protests in Balcombe, the determination is clear, and there has already been one blockade of the entrance to the drilling site, which blocked the gates for 6 hours.

There are over 160 anti-fracking groups in the UK, and they are undoubtedly raising awareness of the many problems for people and planet that fracking creates. The British government needs to listen to the communities who for too long have simply had politics 'done to them', and who are now rising up.

Cuadrilla, currently has two applications pending to frack in small villages in Lancashire in the north of England. Halting these plans would be a major blow to the unconventional oil and gas plans across the UK – including in Balcombe and Horse Hill – and across Europe. Friends of the Earth stands in solidarity with the anti-fracking movement to say: "not here, not anywhere".