Renewable energy in the hands of citizens - Days of Action

On October 13, Friends of the Earth Belgium, Climaxi and Friends of the Earth Europe met at the Finance Tower in Brussels for an action calling on people to take energy in their own hands. In the context of a climate emergency widely and frequently recalled in the media, two years after the Paris agreement and three weeks before the COP23 in Bonn, it seemed essential to recall the importance of the energy transition towards 100% renewable energy in the hands of citizens! 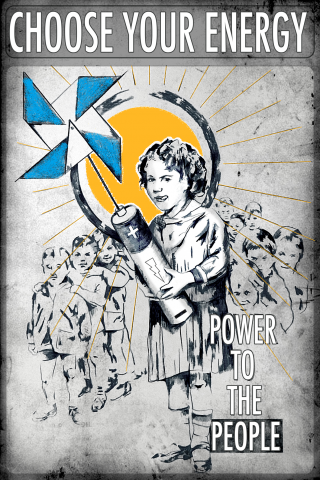 If we want to stay below the limit of 1,5 ° C warming, we need a fast transition towards renewable energy but also a change of system. Multinationals are responsible for the degradation of our planet and the exploitation of people. Adding to this a pinch of greenwashing, it doesn't take long to understand why big business should be kept out of decisions regarding the energy management of the country. Belgium's energy comes largely from old, cracking nuclear power plants. The government, however, prefers distributing pills to people in case of nuclear accident instead of shutting down this infrastructure from the past.

Robin, from Friends of the Earth Belgium said: "We shouldn't wait for our government to take action. If Belgium was serious about tackling climate change, it would stop our old nuclear plants and fix a system that allows tax evasion from multinationals. That's why we decided to take action at the Finance Tower. The projection was showing that citizens are taking energy matters in their own hands and that they are the solution. Many citizens have created or are creating renewable energy cooperatives. It is only up to us to switch suppliers."

We were with FoE Belgium in front of the Finance Tower tonight to demand #energydemocracy! The Days of Action continue! #fossilfree pic.twitter.com/cEUuUaZ0O1

The action started with a tour to shops, restaurants and bars of the neighbourhood to let people know about the different renewable energy cooperatives that exist and are available in Belgium. Later on, everybody met again at the Finance Tower for a projection of a video animation on the tower itself and there was the opportunity for many to meet someone from the cooperative ECOCITER as well as other actors of the energy transition. 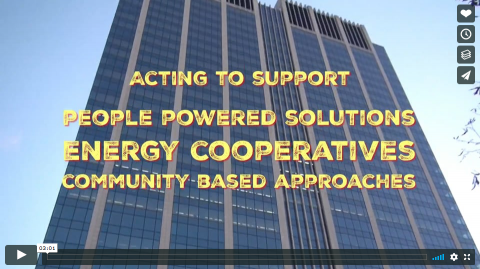