EU countries obstructing key measures that would bring the EU closer to a circular economy are revealed – and they are not your usual suspects.

The European Environmental Bureau, Friends of the Earth Europe and Zero Waste Europe asked member states whether they will support key proposals to boost EU waste policy in the negotiations taking place in Brussels in the coming weeks.

Click on the map to explore different countries' positions 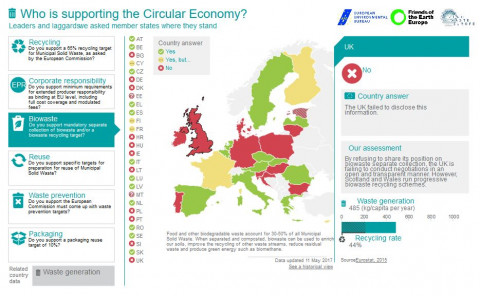 The proposals, already approved by the European Parliament in March, include higher recycling targets for municipal solid waste; targets for preparation for reuse of municipal solid waste and reuse of packaging; better separate collection of all waste streams, including biowaste; EU-wide rules for producer responsibility; and objectives to reduce waste generation by 2030.

The investigation shows that ambitious reform of EU waste laws is under attack by a number of countries. If a regressive position is to prevail in the negotiations, plans to accelerate the transition to a circular economy in the coming years will most likely stall.

Recent leaks (paywall link) of the Council's current common position show that the laggards are winning out, despite higher individual ambition by some member states in areas including recycling targets, extended producer responsibility and biowaste separate collection.

At stake is the creation of over 800,000 jobs, one in ten coming from reuse, and €72 billion a year in savings across Europe. EU countries would also miss the opportunity to avoid over 420 million tonnes of CO2 equivalent, which equates to taking 4 in 10 cars off European roads.

Meadhbh Bolger, resource justice campaigner at Friends of the Earth Europe said: "This is the last chance for countries to set the agenda for how we produce and manage our waste in Europe over the next decade and longer – it is vital to take a long-term approach with ambitious, binding requirements to drive change."

"There are towns, cities and regions all over Europe showing that with the right policy measures, producing less waste and reusing and recycling more is possible, and is good for the planet and people. There's simply no excuse for some of the most important measures to be watered down in these discussions."

Countries opposing most of the proposals include Denmark and Finland – often regarded as leaders in waste policy despite their enormous amount of waste generated. Other countries set to categorically reject higher ambition are Hungary, Lithuania and Latvia.

While eventually supporting a 65% recycling target, countries such as the Czech Republic, Italy, Sweden, Portugal, Luxembourg and Slovakia are expected to oppose plans to make preparation for reuse mandatory, set a 10% target for packaging reuse and set waste prevention targets–all top priorities in a circular economy.

The UK, Germany, Poland, Ireland, Slovenia and Croatia have so far been unwilling to share their position, highlighting a long-standing transparency problem during negotiations between member states, as well as member states and EU institutions. This creates barriers between EU citizens and their national governments, and is at odds with the progressive and transparent stance adopted by the European Parliament.

On the other hand, southern countries that generally struggle with waste management such as Greece and Romania as well as Spain are calling for stronger support for recycling, waste prevention, preparation for reuse and better separate collection.

Other progressive countries supporting the reforms are France, Belgium and the Netherlands.

• High representatives from member states will meet before the end of the month to define the position of the Council of the European Union.

• By the end of May, all three EU institutions – the European Commission, the European Parliament and the Council of the European Union – will enter the final inter-institutional negotiations before agreeing on the final text of the new waste laws.