Signatures alone are not enough to stop climate change, according to Friends of the Earth Europe, as representatives of over 160 countries attend a ceremony in New York to sign an international climate agreement, forged in Paris last December.

The Paris agreement requires signatories to limit global warming to well below 2°C and to pursue efforts to stay below 1.5°C. However, current national pledges (known as INDCs) add up to around 3 degrees of global warming and much steeper cuts are required, according to Friends of the Earth Europe.

Sonja Meister, climate campaigner for Friends of the Earth Europe said: "Signatures aren’t enough to stop climate change. We need to stop investing in dirty energy infrastructure. We need to end the exploitation and use of fossil fuels and other dirty energy in Europe, now. If we’re to have any chance of keeping below 1.5°C global warming, the EU must do its fair share to fight the climate crisis. This means urgent action and higher energy efficiency and renewables targets.”

The European Union's current goal of 40% emission cuts by 2030 is at the low end of what climate science predicts will lead to global warming of 2-2.4°C. New research demonstrates that higher energy efficiency and renewable energy targets could cut emissions in half by 2030. The European Commission's own analysis shows this would bring major economic and energy security benefits. 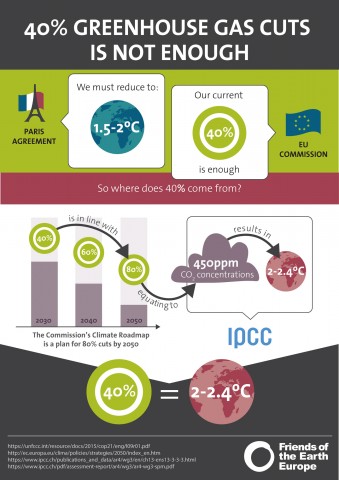