Two thirds of Europe's oil refineries are ready to process ultra-high carbon tar sands, one of the most environmentally devastating fuels in production, according to a comprehensive report on Europe's refining industry released today. Seventy-one out of Europe's 95 refineries are now capable of processing heavy and/or pre-processed crude from tar sands, and have been mapped for the first time by Friends of the Earth Europe and Transport & Environment.

Tar sands produce three to four times more global warming emissions than conventional crude when extracted and refined. The map and study demonstrate the need to step up efforts to keep tar sands out of Europe, in order to keep global warming below 2°C and to ensure a transition to a democratic and renewable energy system. 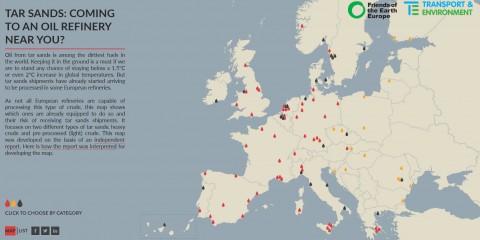 Laura Buffet, fuels policy officer at Transport & Environment, said: "We know that high-carbon fossil fuels like tar sands must be kept in the ground if we are to avoid the worst effects of climate change. But now we also know the extent to which Europe is ready to process this dirtiest of crudes.
The EU should regulate further the carbon footprint of fuels supplied to EU citizens and ensure full disclosure of their origin."

President Barack Obama's rejection of the Keystone XL pipeline has sent a clear signal that tar sands should not be part of the energy mix. Yet two weeks before the opening of the global climate negotiations in Paris, it is clear that Europe has the capability to process these climate-killing fuels while the EU continues to do nothing to stop them entering the Europe. A 2014 report by NRDC showed that unrestricted tar sands import could increase Europe's climate impact by an equivalent of an extra 6 million cars on the road.

Colin Roche, extractive industries campaigner at Friends of the Earth Europe, said: "Tar sands are deadly for the climate, yet the EU's energy policy is giving a lifeline to this dangerous industry. Our map shines a light on oil market and refineries, so that citizens can locate nearby refineries and demand national ministers to keep tar sands out of Europe. Tar sands projects, in Canada and elsewhere, should be immediately terminated, and investments redirected towards clean, renewable and equitable energy projects."

The first shipment of Canadian tar sands oil to Europe arrived at Bilbao, Spain, in June 2014. Initial proposals by the European Commission to implement the Fuel Quality Directive would have discouraged the use of high-carbon fossil fuels like tar sands in road transport fuels, however the final texts failed to do so.