Many are suggesting that it is for the EU Parliament to make concessions on the Energy Efficiency Directive dossier. This downplays the EU Council's underhand negotiating tactics, especially on the centrepiece 1.5% annual savings target.

Over the past months Member States have been aggressively lobbying for a range of exemptions to the 1.5% target. Some, for example, wish to credit savings made before the implementation of the directive ('early actions'). Others want to count savings before they have actually been delivered ('future actions'). Others wish to be able to include savings made by switching from coal or nuclear to wind or solar (which they will do anyway to meet the 20% renewable energy target). 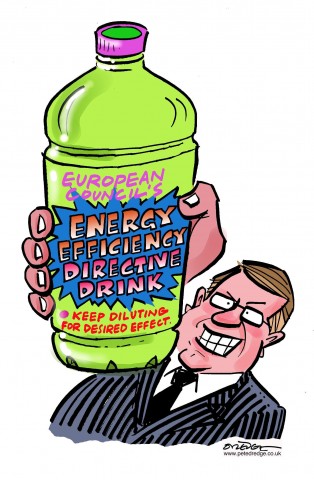 The Danish Presidency has sought to address these loopholes – which risk making the 1.5% target completely meaningless – by proposing to cap exemptions at 25% (i.e. effectively lowering the ambition of the 1.5% target by a quarter). This is being billed as a decisive move towards the Parliament's position for which much is expected in return.

But the Danes' proposal is weak and only covers two exemptions satisfactorily. Other major loopholes are not covered by the 25% cap. And besides, the Council – led by the UK – has sneakily inserted exactly the same exemptions elsewhere into the draft Directive. So even if the Parliament fixes the 25% cap, Member States will still be able to meet their targets by crediting bogus savings.

The Council is trying to appear reasonable. It is piling pressure on MEPs to agree to its 25% cap 'compromise'. In reality this is a decoy. The Parliament is being made to look terribly inflexible for not making concessions, but MEPs must remain firm and negotiate a Directive which delivers real energy savings and all the benefits that come with them.