Vote now for the 2014 Pinocchio Awards!

Fed up with corporate greenwash? Tired of polluting industries getting away with trashing the planet through good PR? Time to vote in the 2014 Pinnocho Awards – Les Amis de la Terre/Friends of the Earth France's annual rundown of who rules the roost at environmental double-speak.

The awards are being organised in partnership with CRID (Centre de Recherche et d'Information pour le Développement) and Peuples Solidaires, and highlight specific cases of social and environmental rights violations committed by multinational companies, highlighting the gap between corporations' public-facing claims of 'sustainable development' and the reality of their practices on the ground. 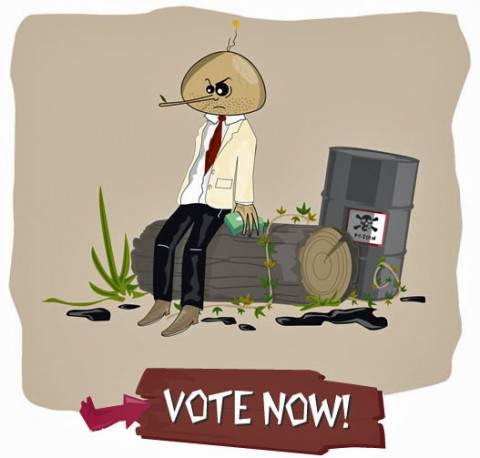 This year, the nominees fall into three categories.

The "One for all, all for me!" award is being contested by three companies nominated for having had the most aggressive policies in terms of appropriation, exploitation or destruction of natural resources. This year's nominees:

Corporations with particularly abusive and misleading communications campaigns masking the reality of their business practices are nominated for the "Greener than green" award, which this year features:

Finally, three corporations are battling it out for the "Dirty hands, full wallet" award for putting profits above the environment, social concerns, or tax obligations.

Through the raising of awareness of abuses of people and planet, Les Amis de la Terre/Friends of the Earth France is fighting for a binding legal framework on multinational companies' activities.

Juliette Renaud, Corporate Accountability Campaigner at Les Amis de la Terre France, said: "There is a growing number of voluntary approaches and codes of ethics, but, since these are not being applied through legally binding policies within France or Europe or at an international level, multinational companies are continuing to operate with impunity, as the Pinocchio Awards illustrate. Our governments must have the courage to tackle lobby groups and properly regulate these kinds of activities in order to protect human rights and the environment from being repeatedly attacked."

In June 2014, the UN Human Rights Council approved a resolution to draft a binding treaty on companies and human rights. France, alongside the UK, Germany, the USA and others, voted against it. A proposal for a law on "parent companies and client companies' due diligence" has been introduced by four political groups but is still waiting to be debated by the French parliament.