Safeguarding Europe's declining wildlife, and the right of European citizens to enjoy nature, needs real protection on the ground – not a complex renegotiation of EU nature conservation laws, argues Friends of the Earth Europe.

After almost two years of torturous wrangling over whether or not to rewrite the EU's two keystone nature protection laws (and a year after over half a million of us called to preserve and reinforce them) the European Commission remains evasive on what it actually plans to do next.

The laws are that rare thing - directives from Brussels that are hugely popular with both politicians and the public. NGOs across Europe, including Friends of the Earth Europe, have convinced the majority of national governments, more than a dozen Environment Ministers, and the European Parliament that deregulating nature protections would be dangerous. Now a weighty expert study for the EU Commission agrees, the nature laws are "fit for purpose".

Study Reveals: The EU Habitats and Birds Directives are fit for purpose

The "Evaluation Study to support the Fitness Check of the Birds and Habitats Directives" was only publicly released in July under pressure from NGOs and an official Freedom of Information request, after it had been held back since March. However the 700-page study makes for revealing reading. It concludes:

Despite such an overwhelming body of evidence and political pressure, Juncker, Timmermans and Vella are in danger of being blind to what's stared them in the face all along.

No excuse for delay remains. It is now up to these senior Commission figures to quickly follow the facts, the advice of MEPs and ministers, and the public pressure of over 520,000 citizens – and proclaim that the nature laws will not be reopened.

Friends of the Earth Europe, as part of the Europe-wide #NatureAlert campaign, wants to see concrete actions to strengthen nature protection on the ground in Member States. This autumn, the EU needs to double down on putting our strong nature protection laws into practice, in order to meet its 2020 target to halt the loss of biodiversity (on which it is far off track).

The study also shows that industrial farming is by far the single biggest driver killing off Europe's nature. And the European Environment Agency recently revealed that farmland bird populations in Europe have decreased by over 30% since 1990. Friends of the Earth Europe therefore calls for a radical overhaul of our food and farming, and for small scale and sustainable farming solutions to be put at the heart of European agricultural policy.

We all need nature to thrive. Having nature in our lives is a right, as an essential part of everyone's health and well-being. That's why we now need actions from politicians and concerete protections on the ground - not more words. 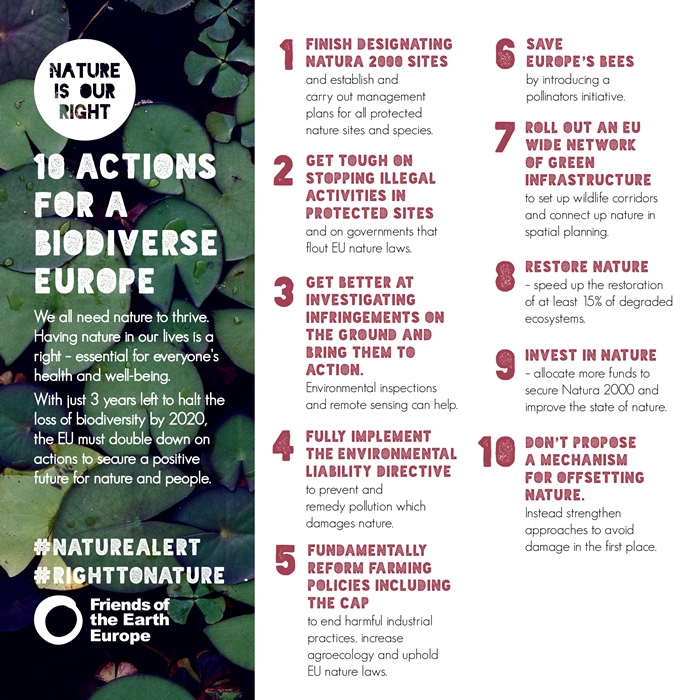