Global 2000 calls for a ban on Glyphosate

A “probably carcinogenic” pesticide which causes damage to people, animals and ecosystems and yet is still in everyday use worldwide; we need to put a stop to it

One of the most commonly used active ingredients of plant 'protection' products [1] may finally be about to get withdrawn from the EU marketplace as it should have been a long time ago. Yes, I'm talking about Glyphosate, but what actually is Glyphosate?

According to Wikipedia "Glyphosate (N-(phosphonomethyl)glycine) is a broad-spectrum systemic herbicide and crop desiccant (meaning it absorbs moisture). It is an organophosphorus compound, specifically a phosphonate. It is used to kill weeds, especially annual broadleaf weeds and grasses that compete with crops." In layman's terms that means Glyphosate is a common pesticide, used to kill off plants that are not wanted. Glyphosate is used across the planet in all kinds of spaces, from private gardens to industrial farms.

It is marketed to the public as a safe herbicide, often with claims that it's biodegradable or can be used safely around pets and children. Ironically, it's also marketed to farmers as "the ultimate killing machine". It has been shown to be very harmful to plant and animal life and The World Health Organisation (WHO) has labeled it as "probably carcinogenic". [2] [3] In short, it's a pretty damaging pesticide and should never have made it to the market in the first place.

Glyphosate was first introduced in the 70s, under the trade name Roundup, by Monsanto. (Who else?!) Farmers quickly adopted the herbicide, especially after Monsanto introduced glyphosate-resistant Roundup Ready crops. This enabled farmers to kill weeds without endangering their crops. Helped by it's friendly, appealing marketing, the chemical soon found it's way into the private sector and into urban planning. It is now quite common for domestic sheds to contain weed-killers with Glyphosate in them. 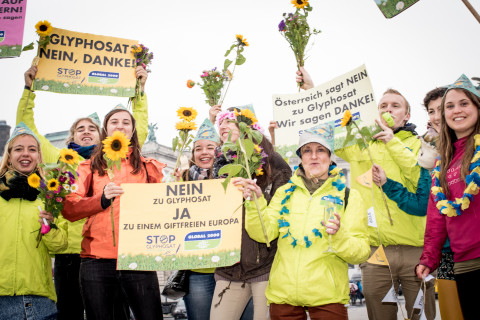 In 2015 many European citizens decided they had finally had enough and were no longer willing to tolerate Glyphosate being sold and used in the EU. With the support of various NGOs they started to rally against the renewal of the chemical's license in the EU. In the Summer of 2016, after a long and arduous campaign involving hundreds of thousands of Europeans, the European Commission was forced not to relicense the use of Glyphosate for 15 years, but instead had to settle for a short 18-month renewal, referred to as a 'test phase'. This was a huge success which defied intense lobbying by the chemicals industry. However, large-scale producers of weed killers, like Monsanto, dedicated these 18 months to even more hardcore lobbying, hoping to protect their profits with a big push. Their deep pockets have been paying for many "studies" and "expert" opinions to show that their product is safe. [4]

However, this license renewal will elapse at the end of 2017 (December 15). Therefore, at the beginning of this year, a coalition of European environmental and social NGOs have started another campaign, STOP GLYPHOSATE, to hopefully ensure a total ban on Glyphosate in the EU. STOP GLYPHOSATE has committed to collecting signatures for a European Citizens Initiative (ECI) to "Ban Glyphosate and Protect People and the Environment from Toxic Pesticides" [5] through different methods. An ECI is a legislative proposal which can be sanctioned by the European Commission if it has enough support. The coalition have been coordinating communications and media on the ECI campaign, and organising decentralised days of action across the EU in support of the Stop Glyphosate ECI to this end. The Commission is required to respond to ECIs with more than one million valid signatures. EU law requires ECI signatures to officially be submitted for verification to the countries they come from in one go. On 3 July, the Stop Glyphosate coalition officially submitted 1,320,517 signatures to 28 national European authorities. That's quite an achievement; this was the fastest ECI ever to reach over a million signatures, which clearly demonstrates the desire to get rid of Glyphosate.

After the ECI signatures had passed the national supervisory authorities, we were able to present our claims to the European Commission on Monday 23rd October. One day later, the European Parliament voted for an immediate ban of Glyphosate in the private and municipal sector and a prohibition from agricultural use until 2022. And on Wednesday, the EC failed in their attempt to win the majority of the EU states in favour of a re-admission. 16 countries - Bulgaria, Denmark, Czech Republic, Estonia, Ireland, Spain, Cyprus, Latvia, Lithuania, Hungary, the Netherlands, Poland, Romania, Slovakia, Finland and the U.K. - voted in favour of the license renewal. This is not enough to reach a qualified majority! Germany and Portugal abstained while Belgium, Greece, Croatia, France, Italy, Luxembourg, Malta, Austria, Slovenia and Sweden voted against the renewal. That is a clear sign that the end of Glyphosate is near! Exactly how near, we will soon find out. Because the Commission is, of course, now asking around the table to see if reducing the period of the renewal to a five to seven year range could bring countries on board to support the relicensing of the popular but dangerous weedkiller. EU officials are expected to discuss Glyphosate reauthorization again at the next committee meeting on November 6. 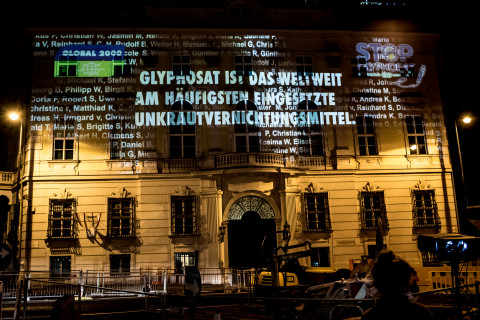 This is your time to shine!

Get together with your activist friends and advocate for a Glyphosate-free Europe on a local or national level.

Here are some ideas on how to do so:

You can also read more about the risks of glyphosate and other actions taken against it within the YFoEE network!

[1] Glyphosate found in human urine across Europe: https://www.foeeurope.org/weed-killer-glyphosate-found-human-urine-across-Europe-130613
[2] World Health Organisation (WHO) classifies Glyphosate as 'potentially causing cancer': https://sustainablepulse.com/2015/07/30/who-publishes-full-probable-human-carcinogen-report-on-glyphosate/#.WInksFwTDL5
[3] The environmental impacts of glyphosate: https://www.foeeurope.org/sites/default/files/press_releases/foee_5_environmental_impacts_glyphosate.pdf
[4]: One of many examples: The evaluation report on glyphosate of Federal Institute for Risk Assessment (BfR) is a copy-and-paste of Monsanto's own assessment: https://www.global2000.at/sites/global/files/Expert%20Opinion%20Glyphosat%20Plagiarism%20English.pdf
[5]: ECI Annex: https://stopglyphosate.org/wp-content/uploads/2017/04/Annex-EN.pdf