"Set her free" written on the Yarl's Wood Fence

People across the UK are participating in a 24 hour hunger strike to support and amplify the demands of over 100 women detained by the British immigration system.

Yarl’s Wood is an ‘Immigration Removal Centre’ in Bedfordshire, England, for women and families waiting for immigration clearance or deportation. The UK is the only country in Europe with no time limit on the length of immigration detention. This means women held in Yarl’s Wood often do not know how long they will be there.

Detainees at Yarl’s Wood started a three day hunger strike on Monday 26th February which the Home Office refused to acknowledge and even threatened the protest could accelerate deportations. In response, the women in Yarl’s Wood initiated an all out strike, refusing to eat, use the facilities or work for the centre.

Opelo Kgari, who has lived in the UK for 14 years and is currently being detained at Yarl’s Wood, wrote about why she is participating in the strike. She wrote: “I know in my heart that none of us are truly free until we are all free. Detention doesn’t work for anyone.”

Today, on International Women’s Day, hundreds of people are joining the hunger strike for 24 hours in support, to raise awareness and amplify the voices of the people at Yarl’s Wood.

In the United Kingdom, we tend to give ourselves an almighty pat on the back - we are progressive, no capital punishment, women are allowed the vote, etc - yet often this perpetuates ignorance, and we too often turn a blind eye to the atrocities that we ourselves commit.

We throw our criticism overseas, to Trump, to Nauru, yet seldom take a moment to reflect on our wrongdoings.

What’s harrowing further is the lack of awareness the public have about this - ask your co-worker today, ‘so what do you think about Yarl’s Wood’- you may be surprised.

This appalling treatment of people in the British immigration system is not new. Denial of visas, closing borders to refugees and deportations are all common practice from the British Home Office.

The women in Yarl's Wood have been stripped of their country, and now their dignity. 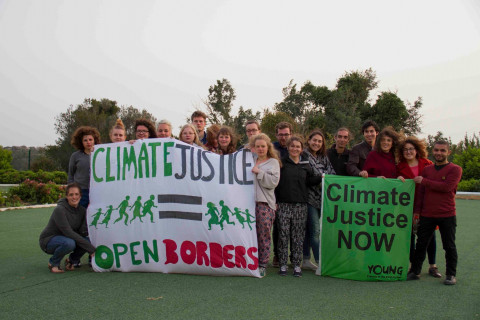 Today, members of UK Youth Climate Coalition (UKYCC) and Young Friends of the Earth Europe (YFoEE) have taken the pledge, and join the 24 hour hunger strike to stand in solidarity with over 100 women who are on hunger strike in Yarl’s Wood Immigration Removal Centre.

Our 24 hour flight is ofcourse nothing compared to the abuse that these women have endured, but hopefully the ‘Freedom Fast’ will amplify their voices, and signal to these courageous and strong women that we support them!

You can also tweet this open letter, or your own, to Amber Rudd @AmberRuddHR, Home Secretary and Caroline Nokes @CarolineNokes, Minister of State for Immigration.